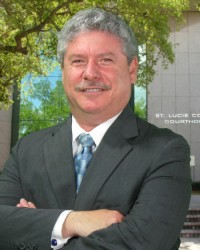 Michael Kessler is known throughout the Treasure Coast as the Go-To-Guy for DUI.┬ĀMr. Kessler is a 1985 graduate of the University of North Carolina School of Law.

Mr. Kessler is a Board Certified Criminal Trial Specialist. He was identified as a “Super Lawyer” by Law and Politics┬ĀMagazine in 2008, 2009, 2010, 2011 and 2012, the first Treasure Coast lawyer to be so honored five consecutive years.

Mr. Kessler has been awarded the highest possible rating by both Martindale-Hubbell and Avvo, the leading consumer agencies that evaluate lawyers.

An active member of the National College for DUI Defense, Michael Kessler is certified to administer Standardized┬ĀField Sobriety Tests approved for use by the National Highway Traffic Safety Administration (NHTSA), and is also certified to administer breath┬Āalcohol tests using the Intoxilyzer 5000 and 8000 machines. Mr. Kessler owns his own Intoxilyzer 5000 and 8000 breath-alcohol guessing contraptions.

He is the co-author of The DUI BOOK: Florida Edition, along with prominent Atlanta DUI lawyer William C. “Bubba” Head.